LASER stands for "Light Amplification by Stimulated Emission of Radiation" and Class IV laser therapy is the use of a powerful beam of laser light directed into tissues to reduce pain, reduce inflammation, increase blood circulation and improve healing time.
Laser therapy is the result of photons interacting chemically and biologically with tissue causing "photobiostimulation" A classic effect of this type stimulation is for example when sunlight hit our skin and produce Vitamin D. Because of the power of a class IV laser, light penetrate deep in the tissue which can then stimulate damaged or painful area of our body to produce tissue healing. .
The idea of light producing healthful tissue effects is as old as science itself, noted, but not understood by early Greek physicians. Medical use of light in the modern era predates the development of lasers, which have transformed light therapy. Lasers allow light therapy to be targeted, specific and quick.

Effects of LASER therapy on the body
The following is a list of only some of the known reactions inside the body:
1. Anti-inflammatory
2. Analgesic (reduces pain)
3. Faster Cartilage & Ligament Repair
4. Improved Circulation
5. Increased Metabolic Activity
6. Trigger & Acupuncture Point    Stimulation/Balancing
7.  Reduction of Scar Tissue
8.  Improved Nerve Function
9.  Enhances Immune System
10.Speeds Wound Healing
What conditions does laser help?
Are there any side effects or associated risks?
During more than twenty years of use by healthcare providers all over the world, very few side effects have ever been reported. Occasionally some old injuries or pain syndromes may feel aggravated for a few days, as the healing response is more active after treatment.

Can it be used in conjunction with other forms of treatment?
Of course! We use Laser therapy most of the time with the others form of therapy available in our clinic: chiropractic adjustments, DTS disc decompression, physical therapy modalities, myofascial trigger points, dry needling, ATM2, electrotherapy and even following surgery. Often different therapies work in synergy together and that increase significantly their effectiveness.
Does Laser therapy hurts?
Not at all. On the contrary people feel a nice and soothing warmth during treatment.
What can we expect during a session?
Sessions last few minutes to 15 minutes depending of the size and type of area to treat, condition of the patient, skin pigmentation etc. Most people will benefit from as little as 6-10 sessions when more chronic problem will need more sessions. 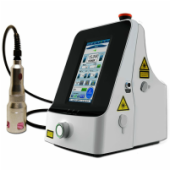 Which Laser do we use?
We are using the Gbox 15W class IV laser made by one of the leading therapeutic laser manufacturer in the world (making lasers like the Diowave and Aspen lasers in US). Our laser can use, as needed, two wavelength of 810nm and 980nm. Class IV means the laser is powerful enough to damage the eyes if we do not wear protective glasses when using it. Class IV are laser with power bigger than 500milliwatts. Class III (coldlaser) use 5 milliwatts to 500 milliwatts, we are using power from 500 milliwatts up to15,000 milliwatts (15W) 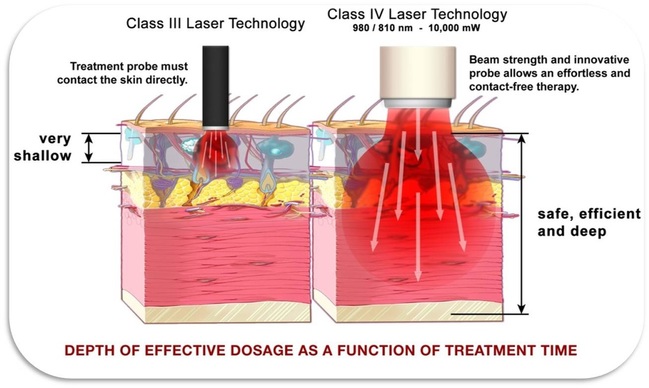